After my short visit to famous Varanasi and seeing all of its beauty, I decided to hop for a short visit to Jaipur. The only airline offering direct flights between these two cities (at least on that particular day) was the Indian low cost airline SpiceJet, operating turboprop Bombardier Dash 8 Q400.

Check-in and security was quite fast, as there was only one other flight departing at the same time (morning departure – 08:35AM) and thanks to the size of VNS airport, you check-in, do five steps and you find yourself at the security screening, do another five steps and ta-ta-taaaaaa you arrived at the gate.

Facilities are quite limited, but quite okay for an airport of this size, that handles mostly domestic traffic. And let’s face it, I can survive a short wait for domestic flight without posting that “perfect picture” on social media from a fancy restaurant overlooking the apron area :-).

Boarding was done simply by walking to the aircraft and it was over in just few minutes.

I booked for myself seat 1A – SpiceMax seat. Only few extra dollars (I think on this particular trip I paid approx. 10USD extra) give you better legroom, pre-booked seat and free refreshments – not bad deal at all. On Bombardier Q400 planes only first row (4 seats out of 78) are classed as SpiceMax. 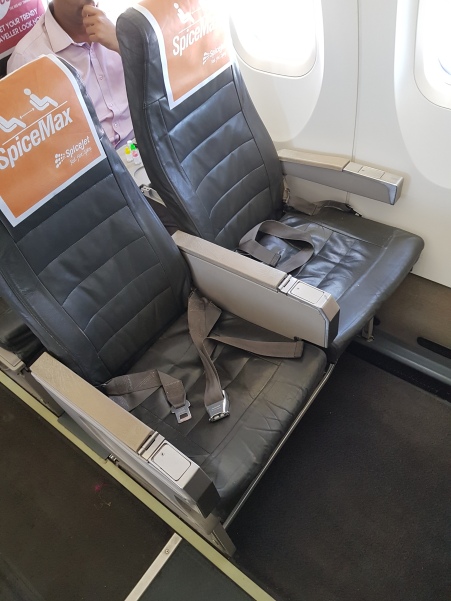 Seat 1A though has a small bulkhead with a seat pocket right in front of it. That takes away from the legroom space (the old used tissue was just a gift from the previous passenger): 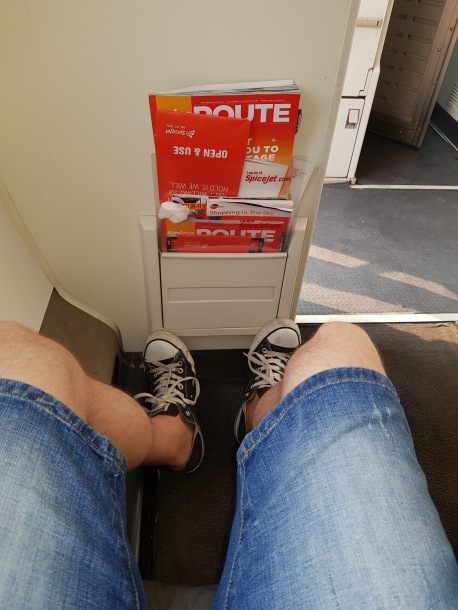 View of Varanasi airport and immediate area right after taking off: 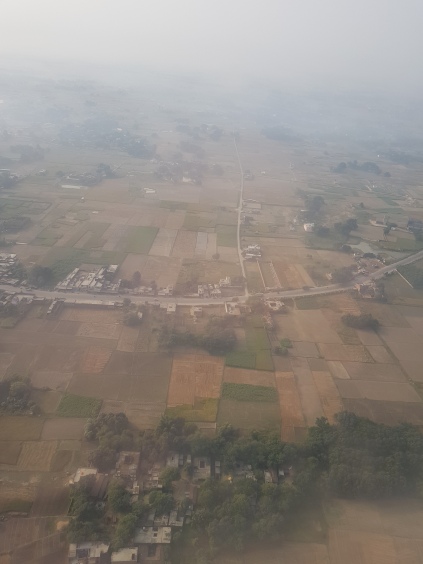 After take off crew promptly initiated the service. All the food and beverages on board SpiceJet flight are for purchase, however as I mentioned I upgraded my ticket to SpiceMax, so I got my sandwich, coffee and water complimentary. During the service crew actually used my name and thanked me for choosing SpiceMax – quite impressive personal touch for a low cost airline:

Time to discover what is inside the seat pocket:

And the safety card: 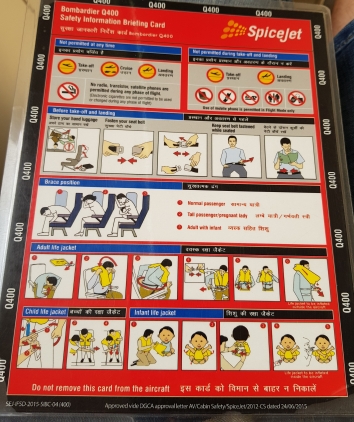 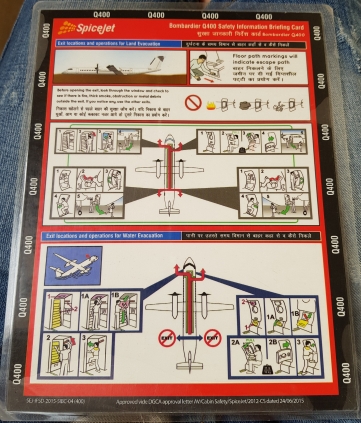 Safety card
Route map of SpiceJet, picture taken from their In-flight magazine. As you can see they cover mostly domestic destinations, with only a few outside of India:

And quick look at the information about the SpiceJet fleet, as per their magazine:

Love the view of wings and those propellers during the flight:

After a flight time of 1:30hrs we started to approach Jaipur airport in majestic Rajastan: 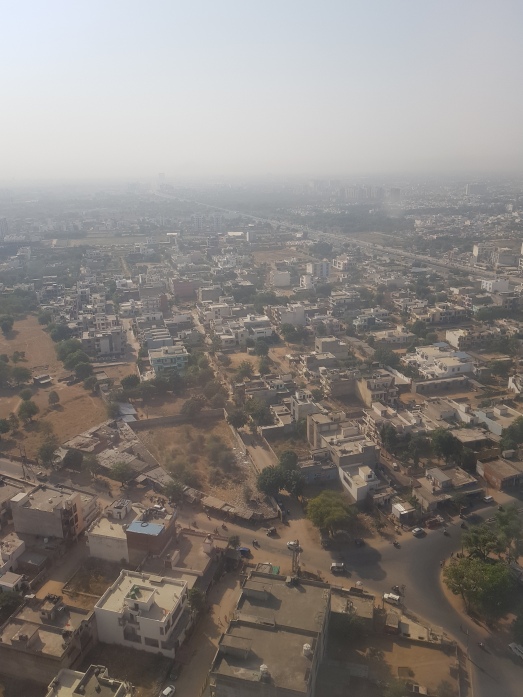 Video of landing with landing announcement in Hindi language (sorry for the ratio :-/):

Afterwards, we were promptly bussed to the terminal, got my bag first out on the carousel after few minutes and off I went to see this amazing city.

How is my overall impression of SpiceJet?

Yes, it is a low cost airline, so one can’t expect having everything top notch and there are definitely few areas I would improve (for example: cleanliness).

However, for the price I paid (total around 85USD including SpiceMax charge), I think I got what I paid for. Would I use them again if I am in India? Definitely.