I cannot even describe how excited I was about this trip. Not only I was about to see one of the most spectacular places in the world, but I was about to fly with one of the less known airlines as well (from the point of view of the European person of course).

There are basically two ways how to get to Uyuni from the Bolivian capital La Paz – many hours in the bus (for sure it is a nice trip in terms of views, but quite lengthy) or a short flight (about 45 minutes) with either Amaszonas or national carrier Boliviana de Aviacion.

There are only 2 flights going each direction every morning and 2 flights every evening, Amaszonas and Boliviana flying one of them each. (Airlines apparently cater to those who decide to take just a day tour in beautiful salt flats. IMHO, if you plan a visit there in the future, reserve at least two days to enjoy it fully.)

When I was doing my research for the trip, I decided to fly to Uyuni with Amaszonas and back to La Paz with Boliviana.

I booked my ticket (approx. 100 USD per person, one way) and then started to do the research on Amaszonas, being fully aware that responsible traveler would do it the other way round. To my shock I found so many negative reviews complaining about this airline canceling flights last moment, leaving travelers stranded without any assistance and several more horror stories.

Day before the flight, with an uneasy feeling in my stomach I asked the hotel staff in La Paz to check the flight status for me. When I told him what airline we were flying with, his response surprised me: “Amaszonas? Don’t worry, they are good, usually there are no issues with their flights.” And let me say, he was right. Yet another reminder to read reviews on the internet with open mind and a pinch of salt.

Flight departure was quite early, but on the positive note, there were no queues at the check-in and procedure itself was completed very quickly and efficiently. 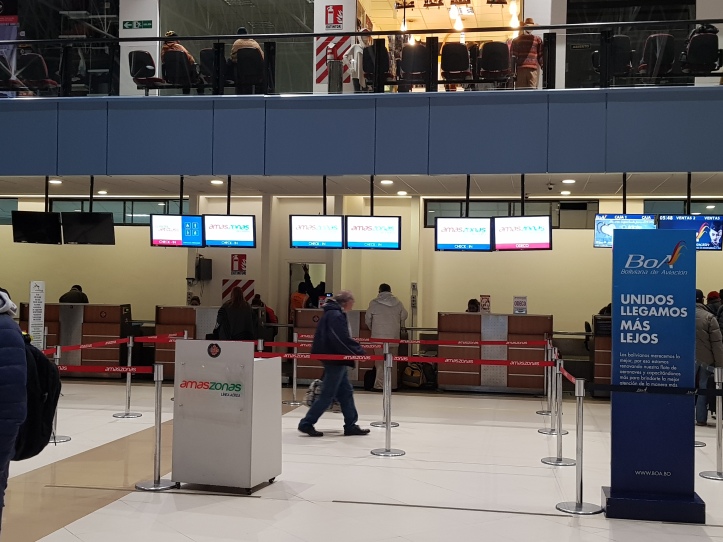 La Paz airport is not too big (main international airport for Bolivia is located in Santa Cruz), so the security and the walk to the gate was quite short without any waiting at any stage. As you can see from the departure, most of the flights are domestic ones. If I am not mistaken, La Paz is the highest international airport, so choice of aircrafts, that are able to land here is somehow limited.

Alarm bells in my head started to ring, when 20 minutes to departure, there was no aircraft.

Mystery was sorted out, when I saw this bus parked outside. Boarding started just 15 minutes before scheduled departure time and thanks to the size of the aircraft, they could squeeze all the passengers into just one bus. 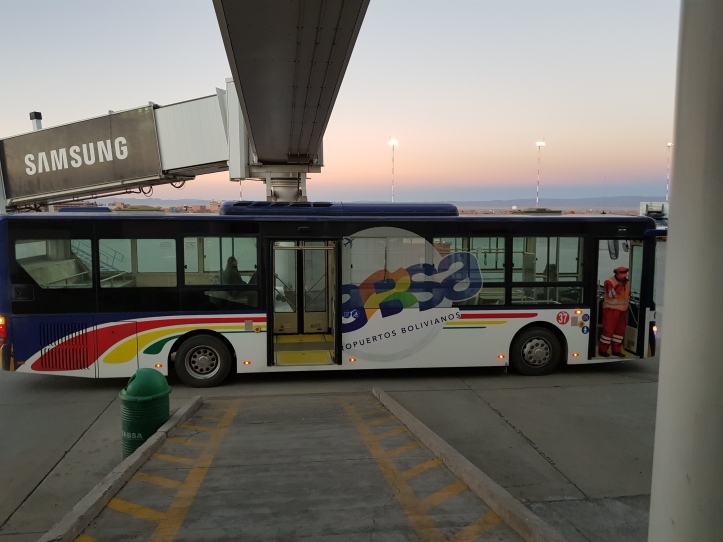 No matter how hard I tried I didn’t manage to squeeze the entire aircraft into one photo. As well the ground personnel were not really happy to see people taking photos and were trying to stop us from doing so.

Amaszonas CRJ200 is configured in a single class economy configuration with 50 seats. As per their website, seat pitch is 31 inches. Flight was not full and I counted approximately 30 passengers on board. 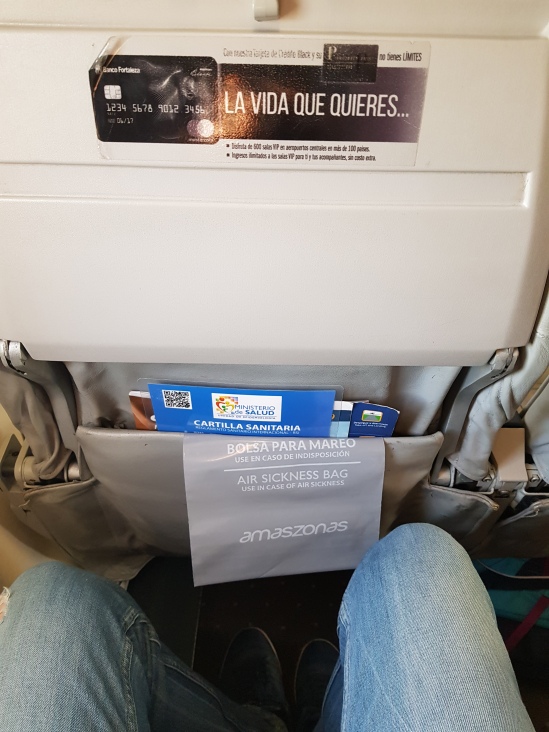 Normally there is only one cabin crew member on board their aircraft, but our flight seemed to be a training flight for one young lady. Therefore there was one regular cabin crew, one trainer and one trainee. Obviously “the official cabin crew” got little bit of a rest as everything was done by the newbie, who had her trainer constantly one step behind her (finally I fully understood meaning of expression “being constantly on somebody’s back” :-))

Sunrise in La Paz offered some really nice views during taxi and take off (it’s actually El Alto town, where the La Paz Airport is located). 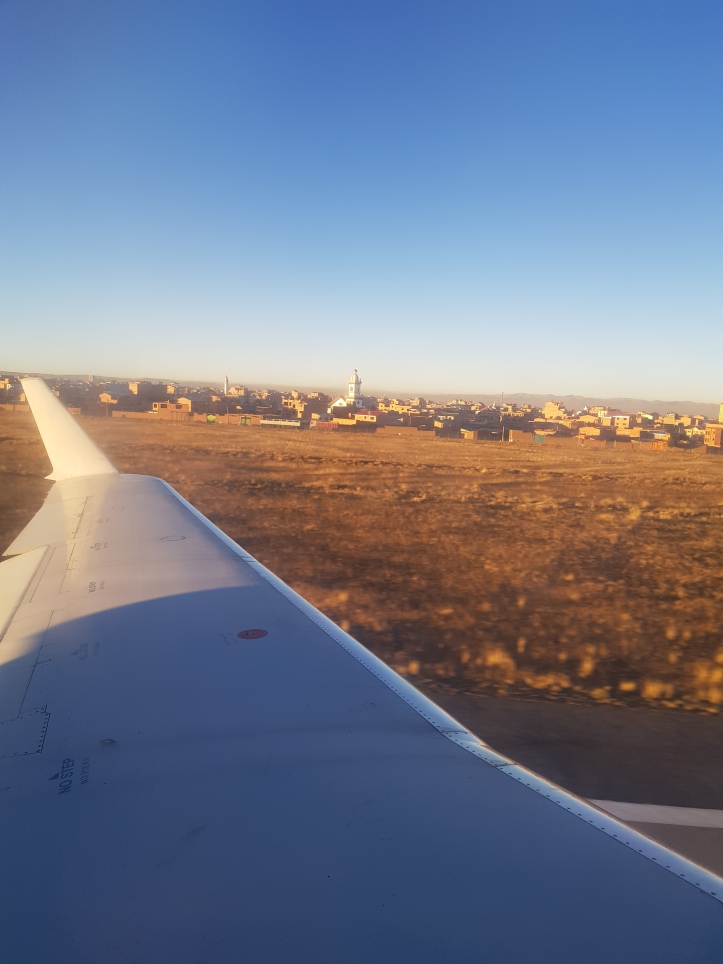 The flight time was only 50 minutes. The service cart appeared in the cabin approximately half way through the flight, with very simple choices being offered: coffee, tea or water. No snacks, biscuits or nuts were offered.

I opted for a coffee, which was obviously powdered and tasted quite sweet even though I didn’t put any sugar. Initially I thought they used sweetened milk for my one, but my friend, who got just a black coffee complained it tasted too sweet. 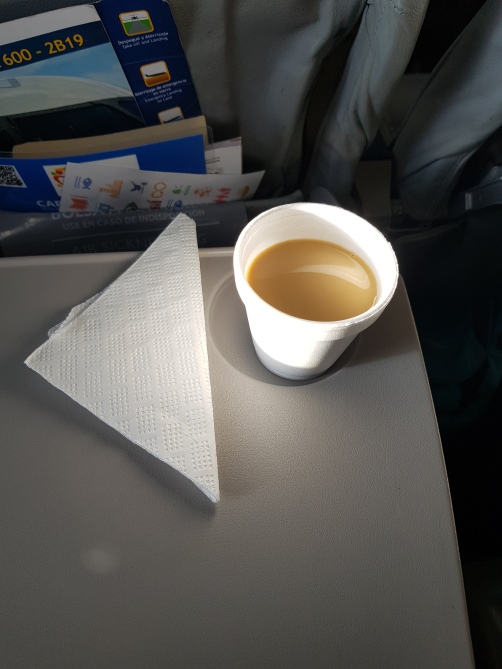 I had a quick look into the seat pocket.

Interesting bit, which I had never seen anywhere before, was this laminated health card advising people to inform the crew, if anybody suffers from there mentioned symptoms. It appeared to be “Bolivian regulatory thing”, as exactly the same health I found in the seat pocket of other Bolivian airline I flew with.

Seat belt signs were kept on throughout the whole flight, but after a bit of wait, people started to walk around and crew did not seem to care much about that. 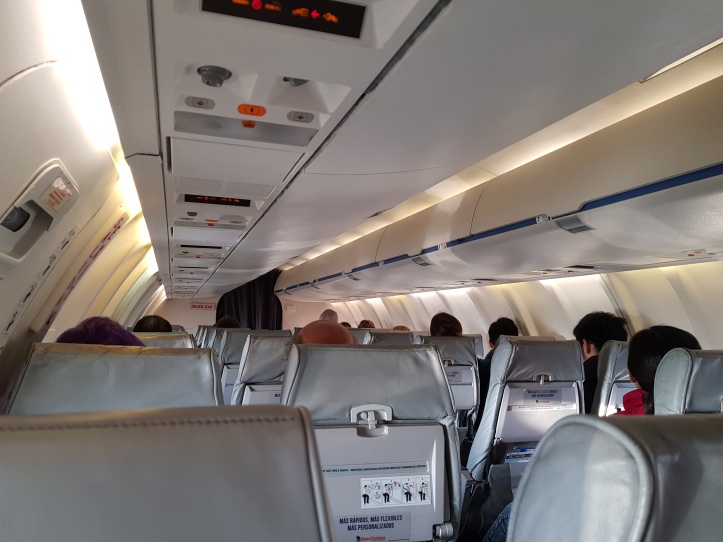 After a short trip we landed in Uyuni airport. Obviously its a tiny regional airport (there was even one major surprise for me, that I still can’t believe it exists anywhere in the world, but more about that in my next review about Boliviana de Aviacion). They do not have any major technologies, so carts were pulled manually by ground staff and even our bags were brought one by one completely by hand into tiny “arrivals room” (can’t call it an arrivals hall, as it was approx. 10 meters by 10 meters in size). 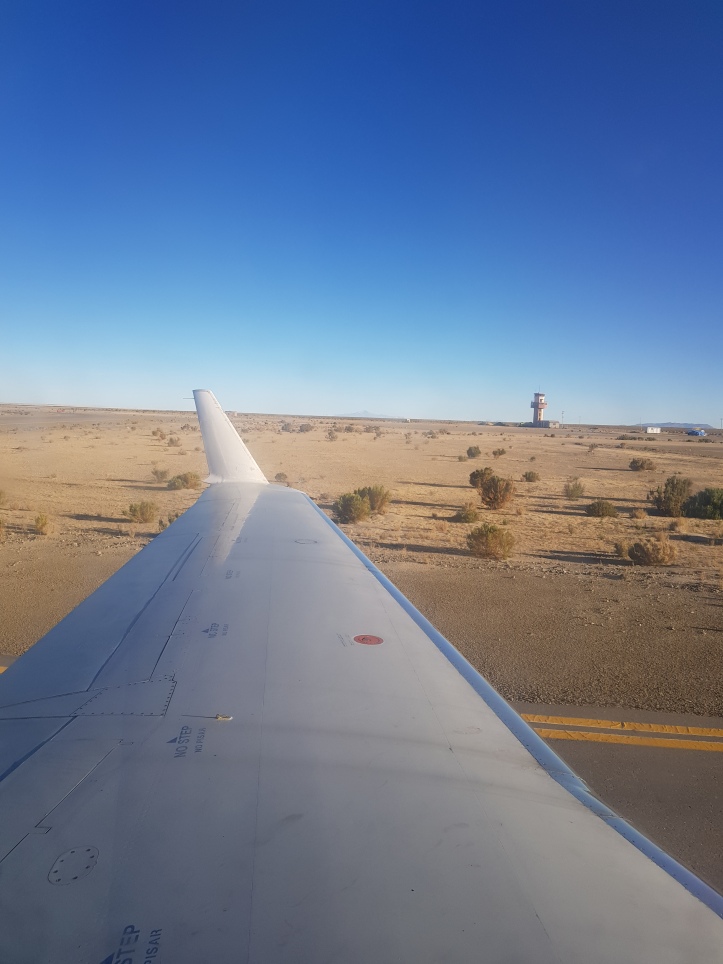 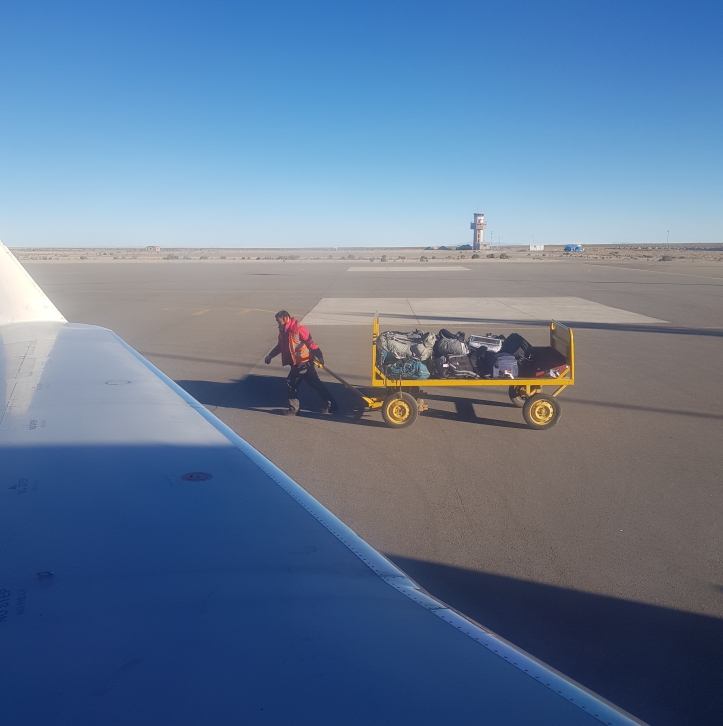 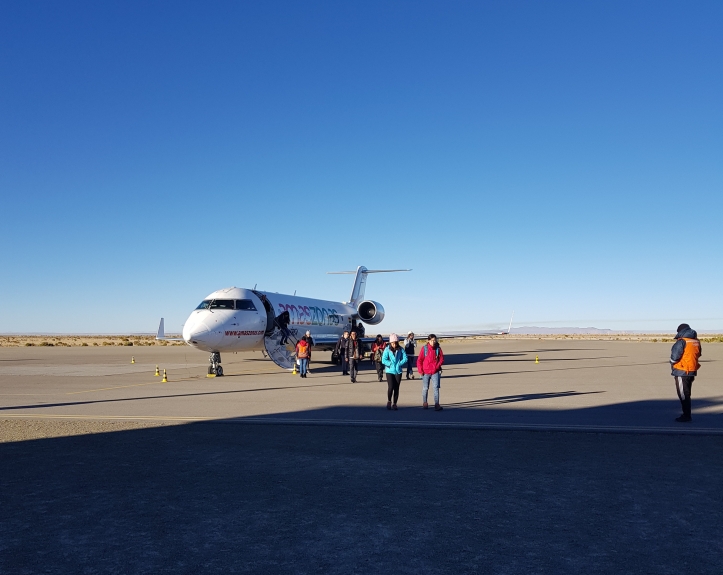 My final thoughts? Aircraft was clean, on time and got me from A to B safely. I think that on short trips like this it is all that matters. On the other hand the aircraft interior looked little bit tired and on board service would use more refining, but overall I would gladly book with them again, if I find myself in that part of the world again.

And now, Uyuni here I come 🙂 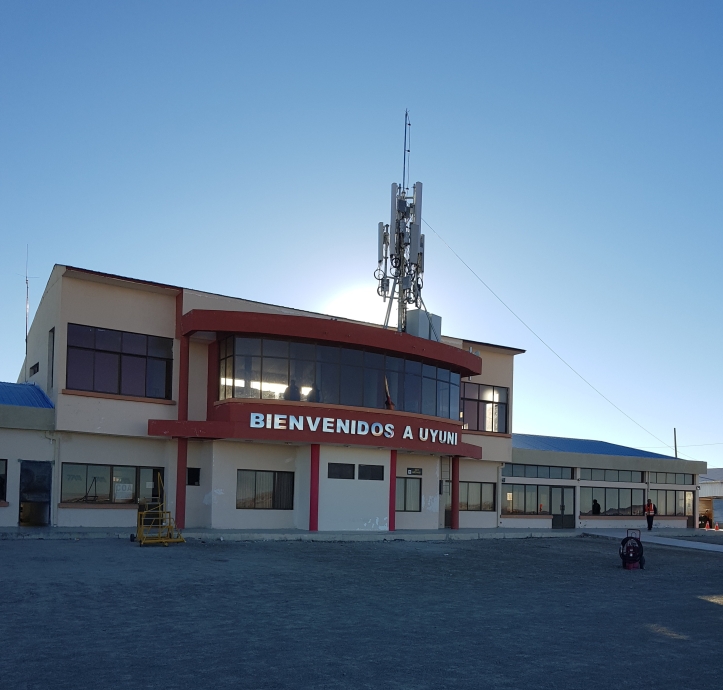